VINCE NEIL has confirmed rumors that he’s recording new MOTLEY CRUE tracks . . . even though it’s only been three years since the band called it quits, AND repeatedly insisted that they’d never reunite.

Vince Tweeted, quote, “Exciting news! [I’m] going back in [the] studio in a few weeks with the boys to record four brand new Motley Crue tracks! Rock On!!”

Exciting news! I’ll be going back in recording studio in a few weeks with the boys to record 4 brand new Motley Crue tracks! Rock On!!

He later added, quote, “For those of you who don’t understand, yes, ‘the boys’ means Motley, and we signed a contract not to tour anymore. We never broke up or said we would never make music again. Hope this clears it up.”

Now, they aren’t recording a new album or EP. NIKKI SIXX was asked if it was something for the movie adaptation of their biography, “The Dirt: Confessions of the World’s Most Notorious Rock Band”, and he said, quote, “Yup.”

Just two years ago, Nikki said there was, quote, “no chance” of Motley Crue recording together again. 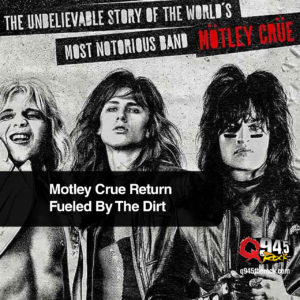